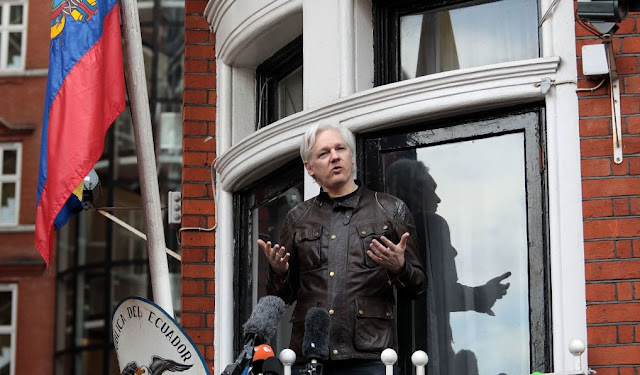 The founder of WikiLeaks has been offline for a few hours after Ecuador suspended his internet access. WikiLeaks’ founder Julian Assange can’t connect to the internet anymore.

On Wednesday, Ecuador’s government posted a statement on Twitter saying it cut Assange’s internet access for sending out messages meddling with other countries’ affairs. The message, posted in Spanish, said Assange had broken a “written commitment” not to do that.

“Assage’s behavior, with his messages through social networks, puts in danger the good relationships that Ecuador maintains with the United Kingdom, with the other countries in the European Union and other nations,” read the statement. 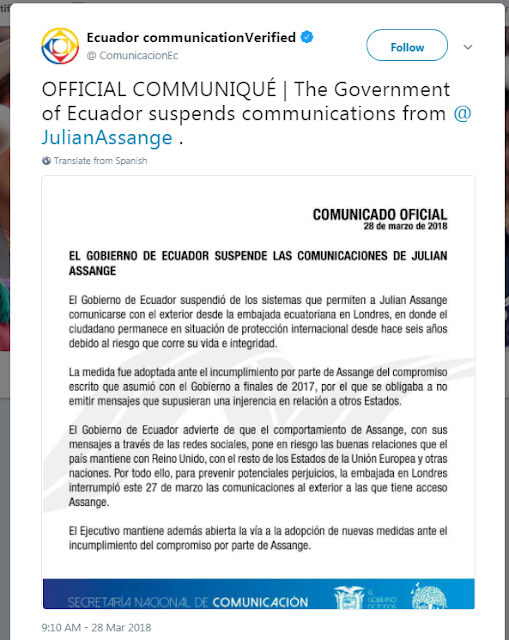 Assange has been living in the Ecuadorian embassy in London since 2012, when the government granted him political asylum.

It’s unclear what message or messages in particular got Assange in trouble. Ecuador’s government and Ecuador’s embassy in Washington DC did not immediately respond to a request for comment via email.

Assange spent much of Tuesday on Twitter posting several tweets related to the arrest of Catalan independentist politician Carles Puigdemont. Puigdemont was arrested in Germany on Sunday. The politician fled Spain after declaring the Catalan independence last year. The Spanish government has indicted him for crimes of rebellion and sedition, among others, and issued a European arrest warrant.

He also posted a somewhat cryptic, an seemingly apropos of nothing, tweet in Spanish that said: “I won’t have the right to speak about political prisoners who were interfered with under any circumstance.”

Assange often comments on international affairs on his personal Twitter account, as well as the WikiLeaks official one. In 2016 and in 2017 he often commented on American politics and the US elections.

WikiLeaks supporters, such as MEGA’s founder Kim Dotcom, took it to Twitter to protest, using the hashtag #ReconnectAssange. 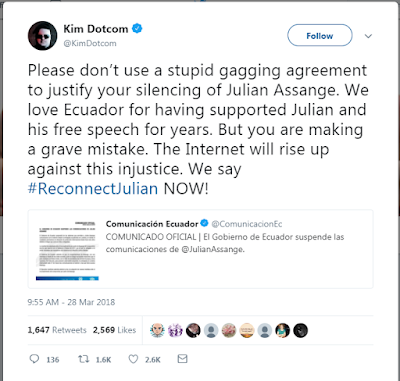