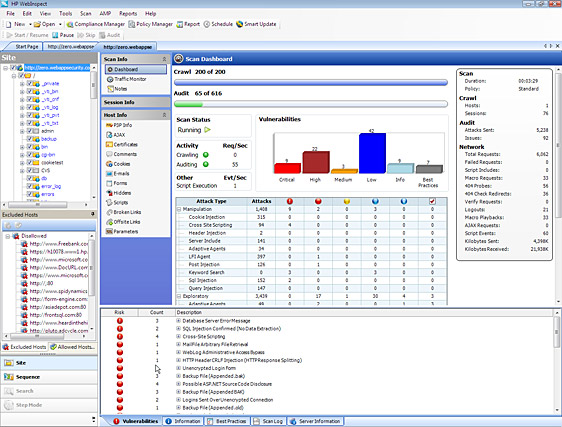 This method will scan the web server for the top 20 vulnerabilities list published by SANS/FBI (www.sans.org)

http://www.safety-lab.com
These include NetBIOS, HTTP, CGI and WinCGI, FTP, DNS, DoS vulnerabilities, POP3, SMTP, LDAP, TCP/IP, UDP, Registry, Services, Users and accounts, Password vulnerabilities, publishing extensions, MSSQL, IBM DB2, Oracle, MySQL, PostgressSQL, Interbase, MiniSQL and more.
Running on its native Windows platform, SSS also scans servers built practically on any platform, successfully revealing vulnerabilities in Unix, Linux, FreeBSD, OpenBSD, Net BSD, Solaris and, of course, Windows 95/98/ME/NT/2000/XP/.NET. Because of its unique architecture, SSS is the able to detect faults with CISCO, HP, and other network equipment. It is also capable of tracking more than 2,000 audits per system.
The Rules and Settings Editor will be essential for the users willing only to scan the desired ports and services without wasting time and resources on scanning other services. Flexible tuning lets system administrators manage scanning depth and other options to make benefit of speed - optimized network scanning without any loss in scanning quality.

UrlScan is a security tool that screens all incoming requests to the server by filtering the requests based on rules that are set by the administrator. Filtering requests helps secure the server by ensuring that only valid requests are processed. UrlScan helps protect Web servers because most malicious attacks share a common characteristic they involve the use of a request that is unusual in some way. For instance, the request might be extremely long, request an unusual action, be encoded using an alternate character set, or include character sequences that are rarely seen in legitimate requests. By filtering unusual requests, UrlScan helps prevent such requests from reaching the server and potentially causing damage.