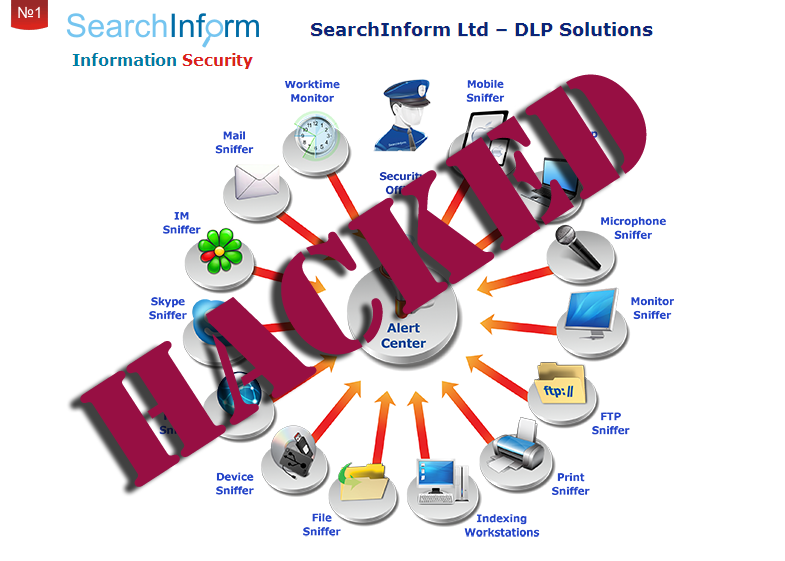 Today Russian hacktivist @Rucyborg has announced a leak of data from Searchinform and sent a message out to its director.
The leak was announced a couple of hours ago via twitter and posted to cyberguerrilla.org with a message which states that the hackers have had access to searchinform.ru since as far back as 2012 and that they have infected download links. The leak was uploaded to bayfiles and is part 2 of an on going assault on Russia in relation to the recent drama that putin has been creating.
Searchinform is one of them sneaky company’s with an even more sneaky product which allows snooping on others, while in this day and age is not so surprising but the extent which they do go to is pretty extensive and really does pose a huge security risk to one if the wrong person was to be using it. They offer work time monitors, full-on network sniffers designed at modern day communications over social medias, microphone sniffers for recording employees and a whole range of other products.
Data leaked is in a 382MB compressed file that contains well over 3000 files which include instructions and usage information, also it appears to have copies of searchinform for clients and basic new client setup information. In normal fashion there has been a imgur gallery created with a preview of the contents of this leak which can be found below, i have also added a couple of screen shots of the contents of the uncompressed leak data.
The message on cyberguerrilla.org also has a direct message for the CEO of SearchInform.

Our message to SearchInform.ru – director Ozhegov – you are a bunch of FSB bastadz – leaking information to all the counterparts and outsiders – you provide so called CONTUR of Security to main russian corps – and keep control of all the clients for the SORM needs – nonight – the stars – revolt- and this is your downfall.