Now Test your eyesight with your smatphone 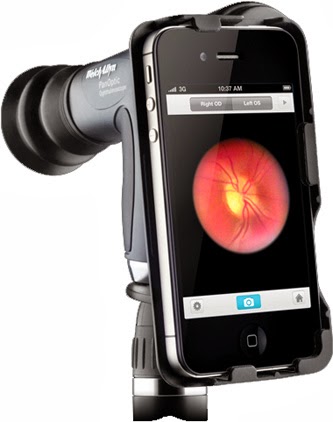 Apps and downloads are old hat. The smartphone can now be adapted to test a person's eyes, and is claimed to be India's first mobile phone ophthalmoscope.

The phone-cum-scope can capture high-quality photographs of the retina in the eye to detect defects. Converting the smartphone to an ophthalmoscope is quick and easy: fix an LED bulb near the camera of the mobile, a connecting wire and battery. It costs not more than Rs 35-50. The device was invented by ophthalmologists of Sankara Eye Hospital. These pictures can then be sent to doctors for diagnosis.

"We aren't sure if patients can use it themselves. But it helps eye specialists in rural areas who probably don't have high-end ophthalmoscopes. We are networking with doctors in rural areas who can send us photographs of patients' eyes taken through a mobile phone, that can help evaluate the disorder. We've had cases of eye tumours, glaucoma and other disorders related to the optic nerve, detected through photos taken from mobile phones with a minimum 5-mega pixel camera," said Dr Divyansh K Mishra, retina fellow, Sankara Eye Hospital, who was one among the doctors who invented the new technique.

Back in 2002, Dr Shanmugam had tried taking pictures of eyes through a handycam. "Technology is now advanced and some cell phones have 21 pixels. We won't stop using ophthalmoscopes but this is an added advantage. Eye care field technicians can now immediately diagnose a serious eye condition as they're able to instantly send images of the patient's retina to doctors in the city, via social networking sites," said Dr Mishra.

In 2010, a team of students from Massachusetts Institute of Technology came up with a device to be attached to a mobile phone that can test the visibility of eyes and find out the refractive errors. It was called NETRA (Near-Eye Tool for Refractive Assessment). The user has to place the device in front of the eye and look into the lens attached to the phone. While pressing the arrow keys, the user can see green and red lines which overlap. The same process is repeated eight times, with the formation of green and red lines on the screen at different angles. The assessment of the eyes is done based on the visual index and prescriptions are made based on the same.
Source: TOI